When innate immunity recognizes a pathogen that has entered the human body, it immediately responds regardless of the identity of the antigen. Macrophages, dendritic cells, NK cells, and neutrophils, which are innate immune cells, cause inflammation or remove foreign invaders through phagocytosis.

On the other hand, adaptive immunity remembers the identity of an invading pathogen, and can respond quickly and strongly when a second invasion occurs. B cells, which are adaptive immune cells, produce antibodies that neutralize viruses and bacteria. T cells activate cytotoxic T cells and helper T cells to eliminate invaders or induce further immune response.

Recognition of PAMPs by an APC Through PRR

PAMPs do not originally exist in human cells. They are specific proteins that exist in microorganisms such as bacteria, viruses, parasites, and fungi. APCs (Antigen-Presenting Cells) in the human body regard PAMPs as ‘non-self’ (foreign substances), and this triggers an innate immune response.

In immunology, the sources of PAMPs are known as bacteria, viruses, parasites, and fungi. Representative examples of PAMPs include bacterial and fungal polysaccharides, bacterial flagellin protein, viral RNA & DNA, and parasite GPI anchors.

PRRs are proteins capable of recognizing molecules frequently found in pathogens (PAMPs) and activate the immune system. There are four families of PRRs as follows; 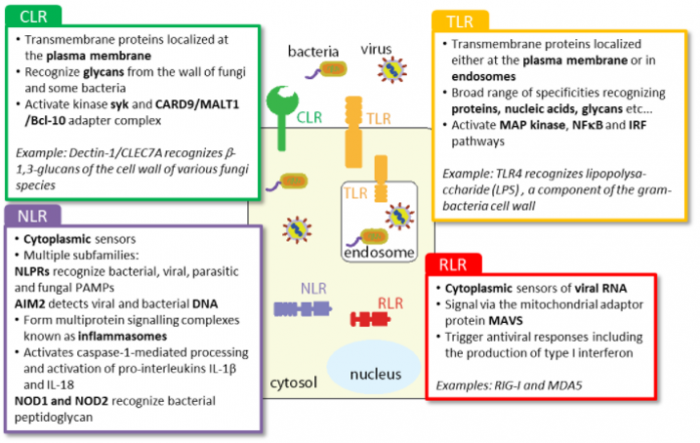 Cancer immunotherapy is a drug that prevents cancer cells from evading the human immune system or makes immune cells better recognize and attack cancer cells. Many drugs such as TLR agonists and immune checkpoint inhibitors are being developed as immune anticancer drugs.